Most people are surprised when they learn that we are growing a certain group of apple cultivars just for our cider production. It is very experimental to plant these varieties that have typically been grown in a marine climate in our arid growing region of eastern Washington. But the trees love it here; there is fruit on 2- and 3-year old wood.  We plan to press 30 bins off of our 8 acres this fall, with more coming every year. Craig planted two long rows – each with 100 trees – and 30 varieties as our own test block.  We have already grafted a few varieties to more climate-friendly varieties. 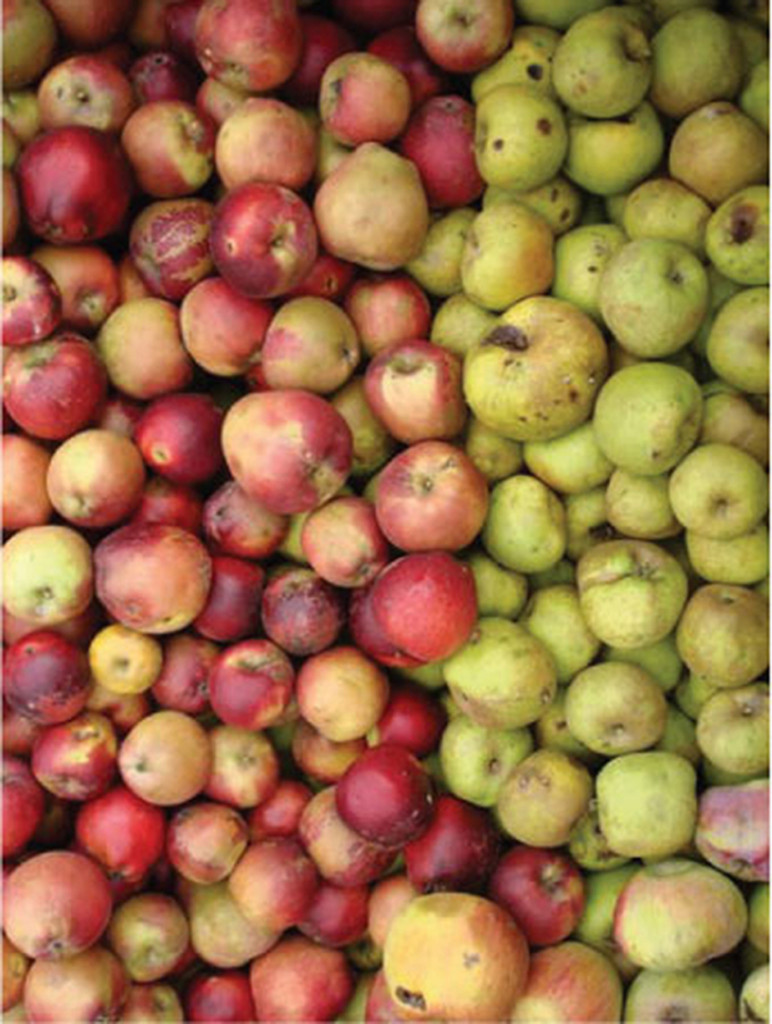 Cider apples are grouped into four main types according to the nature of their flavor components.  A truly complex and well balanced cider takes blending by a cider maker to create just the right blend from the following types of apples:

Normally, ciders are blended using juice from several apple cultivars to give the best results. The apple varieties we are blending include:

Demand for Heirloom Apples is tricky; the people that know about them desire access to them, cook with them, and eat them.  But most people don’t know that at one time there were 15,000 apple varieties grown in the United States.  Harmony Orchards has a young orchard with the following varieties: 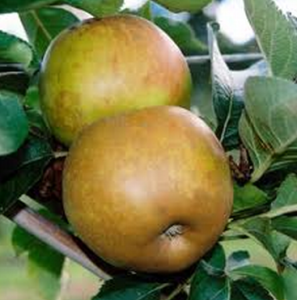 As to its history, Ashmead Kernel was among the 200 cultivars brought from Europe by the well-known American horticulturist of the time, Robert Nitschke. The original tree came from a seed planted by a Dr. Ashmead who practiced in Gloucestershire, England, in the 1700’s. 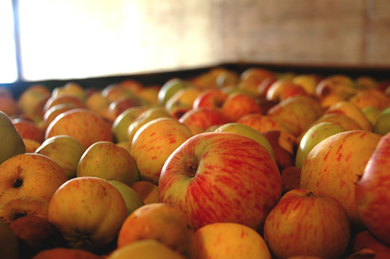 The Gravenstein was introduced to western North America in the early 19th century, perhaps by Russian fur traders, who are said to have planted a tree at Fort Ross in 1811.  Although widely known as “Gravenstein” in English-speaking countries, the correct name is “Graasten” since the mother tree was raised at Graasten Castle in southern Jutland, Denmark. 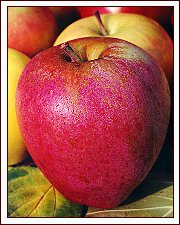 This is a very old variety dating to the 1700’s and originating in the Northeast, probably Connecticut. Listed in southern catalogs as Black Gilliflower or Red Gilliflower, many apple growers believe this apple is the same as the old southern apple, Crow’s Egg.

Once considered too difficult to pick because of diminutive size and overlooked in the commercial market, the surprising taste of the Manchurian Crab Apple is sure to please distinguished palates. As the fruit matures it appears to be roped onto the lush green limbs. We now pick this fruit and make it available to you for zesty jam or as a splash in a fall floral arrangement.

Manchurian Crabapples were found in Japan, China and Russia as early as the 1500’s. For years the Manchurian Crabapple has been interspersed in our orchards because the large white flower is a prolific pollen producer. The tree is vigorous and upright and the skin of the tiny fruit is a gorgeous blend of reddish-pink and yellow.

This variety was never considered a viable commercial choice, and after all the other apple varieties had been picked and shipped to market, the fruit on the crabapple trees fell to the ground–overlooked by all but the loyal jam or jelly maker. This season Harmony Orchards has decided to pack this ancient apple, giving you the chance to try the delicious and simple recipe. As with all of our apple varieties, this fruit was organically grown. 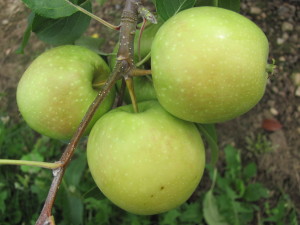 Also known as La Albemarle, the “prince of apples” was cultivated nearly three hundred years ago in what is now New York City, on the banks of the Newtown Creek. This sweet and tart green apple became so prized by the most cultured citizens of our new republic that Thomas Jefferson declared from France, “They have no apples here to compare with our Newtown pippin.” To this day, Newtown pippins are grown at the Virginia estates of Thomas Jefferson (Monticello) and George Washington (Mount Vernon). 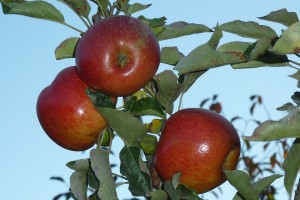 Known as Thomas Jefferson’s favorite apple, this apple is unexcelled in flavor and quality. Spitzenberg was discovered in the early 1700’s at Esopus, on the Hudson River, 80 miles north of New York City, by an early Dutch Settler named Spitzenberg. The all-purpose Spitz is excellent for eating fresh, for baking and drying, and for applesauce.

The Lady Apple has one of the longest histories of any fruit variety, going back to the seventeenth-century orchards of Louis XIII and possibly beyond that to ancient Rome. The Lady Apple…also known as Lady Sweet, Christmas Apple and Pomme d’Api.

You might wonder if an apple this small could be satisfying. In fact, the intense flavor -a sunny sweetness like that of dried fruit, with a hint of citrus – makes up for there being only a few bites. This variety is unusual in that a good deal of its flavor and aroma are concentrated in the smooth skin. We recently started experimenting quite successfully with this apple in baked goods (with the help of an apple corer!).

Harmony Orchards is one of the few, if not the only, growers bringing organic Lady Apples into the market place. We are curious growers–always looking for niche apples that we can preserve for the market place. A perfect micro climate exists at the end of the Yakima Valley where we farm. The cooler climate is conducive to giving the Lady Apple a rosy cheek, and we color pick this variety over several weeks, allowing for maximum exposure to sunlight.

Aside from its value as a dessert fruit, Lady Apples have been a traditional choice at Christmas in centerpieces, garlands and wreaths. In New England the apples were also valued for cider.